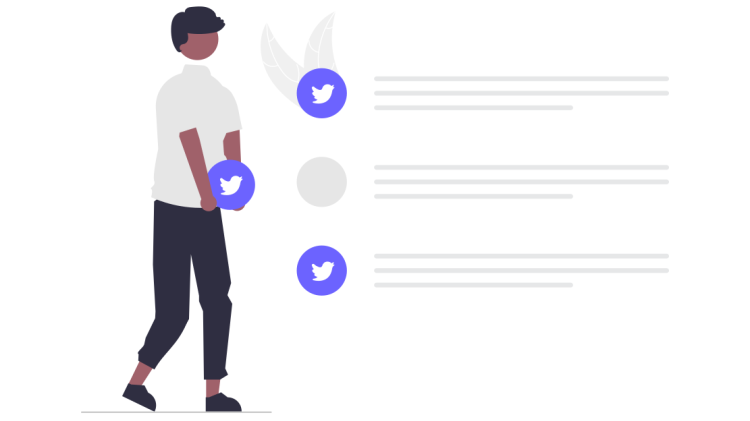 Then I started being serious about it and it changed my life. I went from 500 to 10k in 6 months. It literally gave me superpowers.

Here are my top 3 reasons why I think you should invest in your Twitter presence.

I rushed to Twitter and I found life-changing pieces of advice which helped me be successful in my new position.

I was amazed by the number of very practical tips I got on Twitter.

Just a few examples of what you can find:

Yep. On Twitter, you learn from others and you share your learnings. That’s how you get noticed.

But why is that so important?

Because resumes are dead.

A good portfolio with live projects will be 10x more efficient at showing your skills and unique personality.

Twitter is filled with very supportive people who can review and give you feedback on your work. This will help you grow as a developer and start building your audience as people notice the good work you’re shipping.

And who knows? Maybe a few of them will become customers and your side-project will get big!

As a dev, sometimes you may feel like you’re very demanded and will never be out of a job. That may be true. So the incentive to build a network isn’t quite as strong as for other people.

But I don’t see it this way. The reality is when you want to work for a cool project/team/industry, you will definitely have more competition and likely see a pay decrease, even as a developer. I remember when I had a video game company: I had zero problems finding great devs at a reasonable salary.

So if you want to have your pick amongst the best jobs available, the best way to achieve that is for the recruiters to already know you exist and have them talk to you about job openings before they’re even on the market.

And that is what you call having a network.

Knowing people can also help you find the expertise you need but don’t have. Whether you’re struggling with a particular tech stack or looking for someone to help you with something not tech-related, Twitter is a go-to resource.

By the way, I recently hired a dev buddy to help me out. Guess how I found him? Yep. Twitter. And I didn’t just find one, I had quite a few people interested (but only the money for one 😅).

My personal experience is that job offers I get from Twitter are 10x more interesting than the crappy ones you get from LinkedIn.

I saw so many makers finding their dream job just because they showed their work on Twitter.

As some people say, a good thread, a viral tweet or a random DM can create an opportunity that will change your life.

3. Become more than a coder

You know what’s even better than a dev?

A dev with an audience.

Growing your Twitter following means you can diversify your activities and start selling your skills and knowledge in a whole new way other than getting paid to write code.

Having an audience means you can do other things, like:

You’ll always want to code and build new stuff (I do). But sometimes, it feels good to take a break on something different or to use your skills in a new way. An audience is key to achieve that. Opportunities come from the people you know and who know you.

What I like about Twitter is also that it’s (mainly) a text-format social platform, making it easier to express yourself if your first language isn’t English (like me) or if you’re an introvert.

And much like Reddit, people have a strong sense of belonging to the platform so there’s real relationship building.

Not to mention there aren’t many very large social networks that have dynamic dev/tech/startup communities.

All this combined makes Twitter the best place to start building an audience as a developer.

So how do you grow on Twitter as a programmer?

I won’t lie, it takes time.

And don’t spend 3 months trying to figure out what your “unique angle” will be.

Focus on publishing a LOT first, and try to never miss a day.

After a few weeks, you’ll start noticing what works and what doesn’t. That’s how you slowly shift from quantity to quality.

Still, during the first few months there were so many days when I was like “shit, I have no idea what to tweet right now”.

As a developer, I couldn’t stop myself from coding something to solve that.

It started out as this huge, searchable library of high-performing tweets. You could just type in a few keywords and see a bunch of relevant tweets that had really high engagement. The idea was that by exposing yourself to better content, you could create better content yourself.

A lot of people liked it so I kept hustling.

Now, a few months later, Tweet Hunter has a full suite of AI tools that will help you build a Twitter audience in just 10 min a day. And it reached 1st spot on Product Hunt (something I tried and failed 6 times before).

I honestly believe it can help anyone start or level up his Twitter presence.

But whether you use it or not, I hope I have convinced a few of you to start growing an online presence on Twitter. If so, then consider this guest post a success!

If you have questions or just want to chat, I would be happy to on Twitter.

Did you like this article? Share it with your friends:
LAST UPDATED
October 11, 2022
HITS
3129
« Free certifications for developers Interactive learning tools »

I write monthly emails full of real-world web development tips and resources.
No spam, unsubscribe at any time.